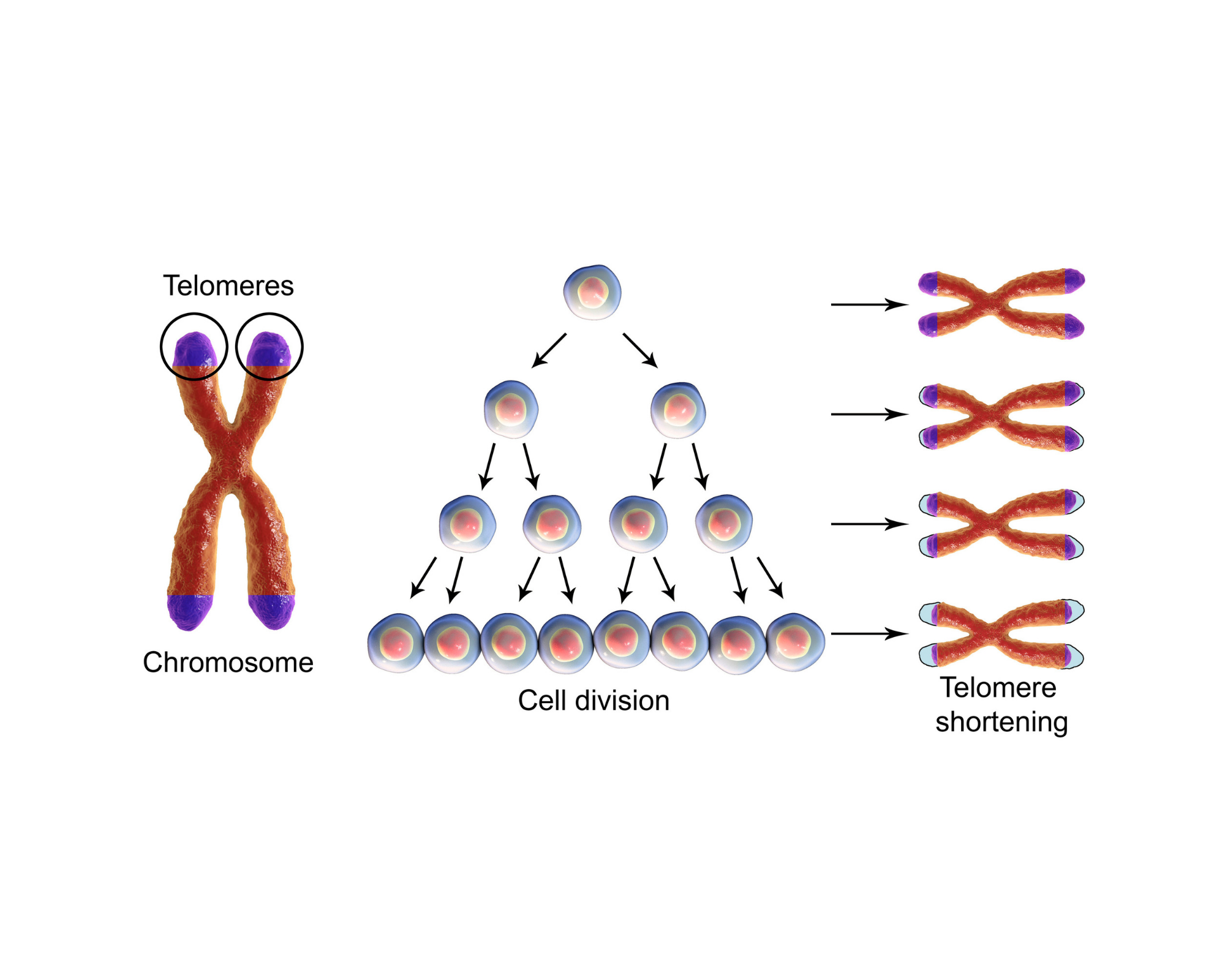 Telomere length and telomerase activity are now recognized as compelling markers of body aging.
Telomeres are protective caps at the ends of chromosomes that protect DNA strands from damage during cell division. With each cell division, the length of telomeres decreases somewhat, but then it is restored to its original length under the influence of the telomerase enzyme. When a certain critical minimum telomere length is reached, the cell will no longer divide so as not to reproduce cells with damaged or partially lost DNA. And since the cells are not updated, diseases arise and the body rapidly ages. Indeed, in the human body there are several tens of trillions of cells, and every day millions of cells die and are born. The mucous membrane of the stomach is updated, for example, in 5 days. New capillaries grow in place of the damaged ones in 2-3 days. During the year, about 90% of the cells in the body are completely renewed (cartilage recovers the longest, and the lens of the eye does not recover at all).
Thus, the longer the telomeres and the more active telomerase, the easier it is for your body’s cells to renew!

So, going directly to the study, it is noteworthy that telomere length did not correlate with age in the meditating group, in contrast to the significant inverse correlation between telomere length and age in the comparison group.
The progressive decrease in telomere length with age has long been known. Short telomeres contribute to genomic instability that promotes cancer initiation and progression. In addition, leukocyte telomere shortening has been associated with a number of age-related conditions such as cardiovascular events, including stroke and myocardial infarction, and cognitive dysfunction.
While stressful life events and psychological stress are consistently associated with leukocyte telomere erosion, several healthy habits and behaviors are associated with increased telomere length or have been reported to decrease the rate of telomere shortening, such as physical activity and exercise. Consistent with previous factors, yoga practice and meditation are associated with longer telomere lengths in blood cells, as also shown by our group’s previous work. Also in the case of cancer patients, such as breast cancer survivors, mindfulness-based therapy is associated with maintaining telomere length. In addition, mindfulness meditation has been observed to increase telomerase activity.
A number of mechanisms have been postulated to mediate the effect of meditation on telomere stability, such as modulation of the hypothalamic-pituitary-adrenal axis or reduction of oxidative stress and inflammatory pathways. Our study found a strong inverse correlation between age and telomere length in the control group. But age was no longer associated with telomere length in the long-term meditator group! Due to the limited sample size, this finding can be interpreted with caution as suggesting that prolonged meditation may counteract the effect of biological aging on telomere length to some extent. Notably, we also found that telomere length was associated with gene-specific changes in subtelomeric DNA methylation in the long-term meditator group. Intriguingly, no correlation was found between the DNA methylation level of the selected genes and telomere length in the control group. First, we cannot exclude in controls that other genes undergo changes in DNA methylation levels depending on telomere length, since we have studied very few genes. Second, these genes have been found to be differently methylated in meditators, and meditation may be associated with maintaining telomere length. Thus, the discovery of a relationship between the methylation of these genes and telomere length is of interest and opens up opportunities for further study of these genes as targets of epigenetic changes in meditators.
As mentioned above, in our previous work, these genomic patches were found to be differently methylated in meditators compared to controls. In the present study, DNA methylation levels in the GPR31 gene positively correlated with telomere length. GPR31 (G protein-coupled receptor 31) encodes a high-affinity cell membrane receptor for 12-S-HETE, which is a metabolite of arachidonic acid secreted by platelets and tumor cells that induces endothelial cell retraction and plays a role in extravasation and metastasis. Notably, GPR31 has been proposed as a target for cancer treatment, as GPR31 mediates membrane association with KRAS (Kirsten’s sarcoma viral oncogene homologue), an important mechanism.

nism of oncogenesis. More recently, GPR31 has been reported to underlie ischemia-reperfusion injury of the liver.
In addition, DNA methylation levels in the SERPINB9 gene are inversely proportional to telomere length. SERPINB9 inhibits the activity of the pro-apoptotic effector molecule granzyme B65 and therefore protects cytotoxic T-lymphocytes from apoptosis. It is also expressed in immune accessory cells such as dendritic cells where it plays a role in antigen presentation. SERPINB9 may promote immune response evasion in leukemic cells and overcome intracellular cytotoxicity in neuroectodermal tumors. It is also involved in autoimmune diseases such as celiac disease. Interestingly, SERPINB9 expression is downregulated in atherosclerotic lesions, and it is suggested that the SERPINB9/granzyme B axis modulates inflammation and insulin resistance in coronary atherosclerosis. In a previous report, SERPINB9 was found to be differently methylated in the blood cells of patients with abdominal aortic aneurysms. The involvement of SERPINB9 in inflammatory pathways makes a biologically plausible association with telomere length, as reducing inflammation is one of the postulated mechanisms underlying the effect of meditation on improving human health.
As for the mechanisms by which meditation alters DNA methylation in certain genes, these remain to be understood.
To summarize again, the effect size of the relationship between age and telomere length was drastically reduced in meditators compared to nonmeditating controls.

WORKSHOP WITH DAVID MELONI IN PUGLIA

HOW TO GET A TAXI IN DELHI?